Conrad Greif has been elected to serve as Chairman of the Lake Taylor Transitional Care Hospital Foundation.  Mr. Greif succeeds Claude A. Smith, M.D., who served as Board Chairman for the last six years. 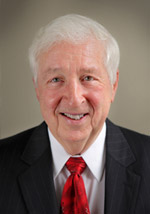 “Mr. Greif has been a leader in the community for many years, and the energy he brings to our Foundation will be a tremendous asset for our hospital and its mission,” said Thomas Orsini, President and CEO of Lake Taylor Transitional Care Hospital.

Mr. Greif and fellow Foundation Board members are appointed by the Hospital Authority of Norfolk’s Board of Commissioners.

Mr. Greif is retired from Bank of America, in which he served as Vice President of Area Administration.  Over the years, he has served on various local Boards and been involved in the community. To name a few, he was Past Vice-Chairman of the Norfolk Public School Board; Past Chairman of the Norfolk Crime Line (an originator); and, a former member of the Mayor’s Task Force on Ocean View.